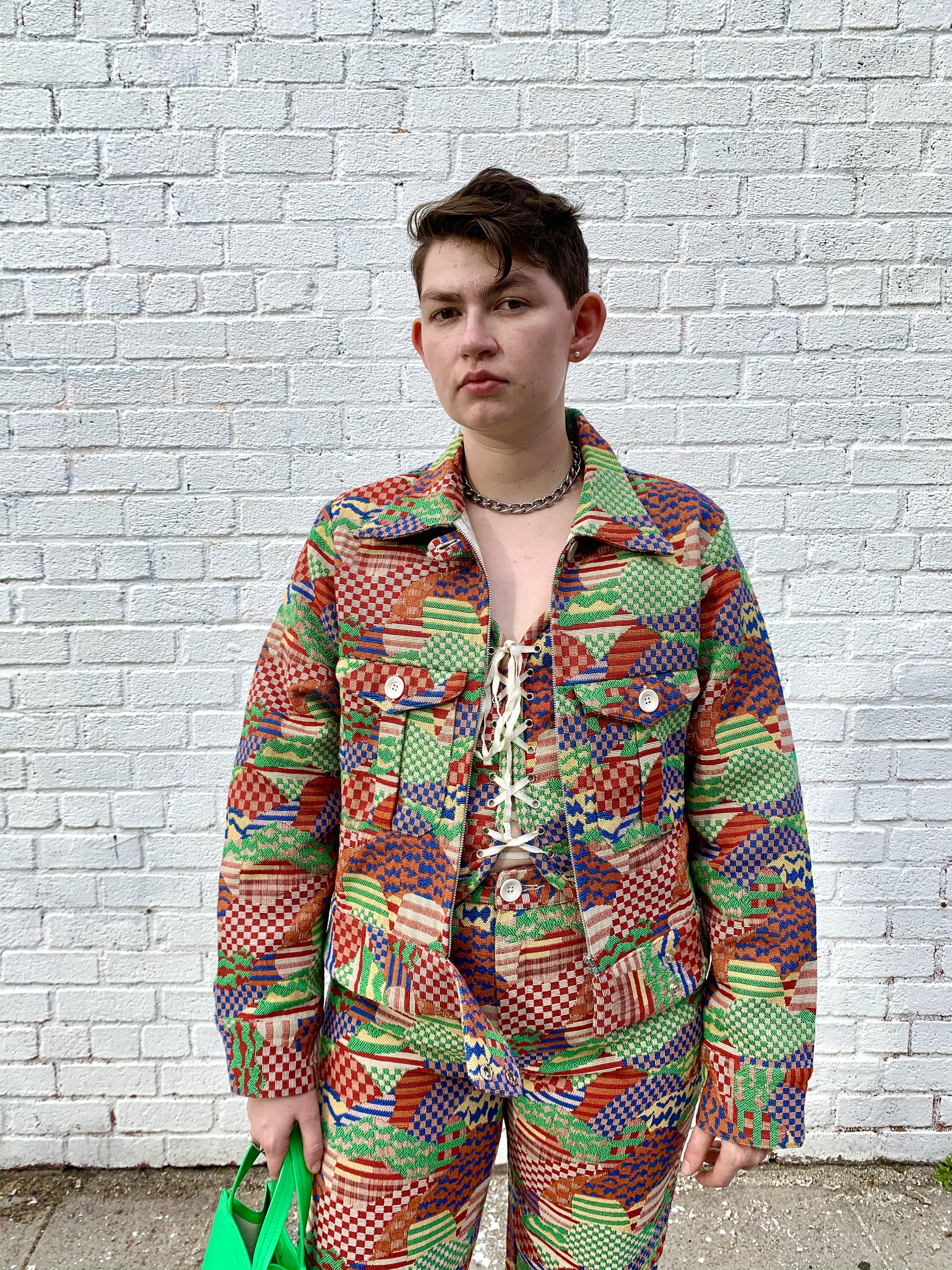 It was like a children’s gym: it had puzzle-shaped floor mats and neon-yellow walls. Patterns with candy-colored swirls and Tic-tac-toe grids. Contraptions hanging from the ceiling and plopped down on the floor. From the outside, you could look in and see the whole thing. Thick black and white lines framed the front window, forming a lopsided circle; their hypnotic undulation lured you in. Zoe Schlacter’s fantasy was waiting for you.

An all-encompassing playground of sculpted sex objects and biomorphic forms, Schlacter’s 2020 exhibition Darn forged their vision of a “trans sexuality.” It embodied the inventiveness, the idiosyncrasy, the defiant unnaturalness of a post-op trans body—and celebrated the creative potential it engenders. For Schlacter, making art is a way of reframing their identity: “A lot of it,” they tell me, “comes from my own shame around gender and sexuality.” They rewrite their experience by coloring it with joy and with whimsy. They bask in the constructedness of their body, riffing on moments of its “failure.” Their “blob looms,” for example—the lumpy and amorphous, Franz West-like sculptures that hold threads for weaving—are “only semi-functional.” But they also have an undeniable sexiness: their strings are taut; their prongs are erect; their colors are electric.

Schlacter mimics the nuances of their gender through the formal language of their art. They want you to read between the lines and still not come up with a clear answer. A tapestry in Darn asks, “Do you know my body is woven?” The question repeats itself, over and over. But the font is hard to read; the letters are curvy and disorienting. The words are almost illegible.

Textiles have always taken center stage in Schlacter’s exploration of gender. As a teenager in Nashville, fashion was their primary mode of self-expression. It was the heyday of fashion blogs: Tavi Gevinson’s Style Rookie was all the rage, Tumblr was booming, and the launch of Teen Vogue brought high fashion to young readers. Schlacter dove in deep. They launched their own blog to exhibit outfits they fashioned from Goodwill finds. They dedicated themself to executing style challenges, like the month when they wore the same dress everyday, styling it differently each time, posting photographs of themself in every final ensemble. Schlacter’s style today looks nothing like it did during the time of their blog; they almost marvel at the performativity of it all. In retrospect, they liken it all to “a kind of drag. My expression of femininity was so hyperbolic.” While their clothes today look different, Schlacter still holds onto the critical lesson of their blog: “The way you fashion yourself is a way you hold power and can affect how other people see you.”

In part because of the care they put into their appearance, Schlacter sees no difference between wearable art and “fine art”—the paintings and sculptures and drawings that museums and galleries hold to a higher esteem. Growing up, their mother, an artist herself, taught them to integrate creativity into all aspects of their life. Crafting pillows for their apartment is, to them, as serious a pursuit as painting on a canvas. To that end, their practice includes frequent collaboration with clothing brands like Print All Over Me and Tyler McGillivary; they design the fabrics for the brands’ ready-to-wear garments. In November 2020, they introduced an off-the-peg item of their own: a knit blanket with their signature maximalist panache. I ask how their process differs when they make unique works of art versus when they make reproducible textiles. But they see these practices as being “intertwined,” as being inseparable from one another. And by waltzing between artistic mediums, between creative categories, they flout conventional hierarchies within the art world. They scoff at its “snobbiness.” At its ghettoization of “craft” and “design” and “costume.”

Integrating art into all aspects of life has been the driving aim for generations of artists. From the Wiener Werkstätte to the Bauhaus, artists have endeavored to fuse art and life, to let aesthetic concerns bleed outside of the “art world” and into the offices, the schools, the closets, the living rooms. Figures like Varvara Stepanova and Sonia Delaunay drew attention to textiles and garments; they argued, in their respective circles, that clothing was no different than painting or sculpture—it, too, carried political weight worthy of artistic merit. For Stepanova, a member of the Russian Constructivism movement, garments held potential to usher in the new socialist order. Art historian Christina Kiaer explains the connection: “The very mundanity of cheap printed cotton fabric—its absolute usefulness in the ‘new everyday life’ (novyi byt) being promoted by the Bolsheviks after the revolution—make it an exemplary Constructivist thing.”1 For Delaunay, a leader of the French Orphism movement, garments could mimic the spirit of modern life. Art historian Sherry Buckberrough buys the argument: “Delaunay’s aesthetic urged reconsideration of one’s place in the world—in sympathy with cultural migrations, collisions, mergers, reformulations—and recognized a progressive bourgeois right to support, through aesthetic presence, the world’s dynamic state of change.”2 Schlacter’s radical engagement of textiles follows in these artists’ legacies.

But unlike Stepanova, who prioritized a garment’s utility, and unlike Delaunay, who prioritized its capacity for metaphor, Schlacter employs fabrics to mask the body’s gender, to confuse its form. They channel an “aesthetic preference for feminine decorative maximalism” into phallic objects and imagery. They encase hard-edge paintings into hand-made frames, embedding themself into the long-feminized tradition of handicraft while also evoking a historically male-dominated idiom. In-betweenness is the root of their visual language.

Schlacter finds a model of such queerness in the theoretical writing of Susan Stryker. They lap up her “watery, poetic prose,” which transverses disciplines, weaving the personal with the scholarly, the literary with the philosophical. Stryker’s concept of “transgender rage,” in particular, informs Schlacter’s work: “Transgender rage is the subjective experience of being compelled to transgress what Judith Butler has referred to as the highly gendered regulatory schemata that determine the viability of bodies.”3 Schlacter reifies Stryker’s “transgender rage” by bulldozing rigid categories within the art world, by defying its compulsion to classify. To them, all binaries are meant to be destroyed.

3. Judith Butler, Bodies That Matter: On the Discursive Limits of “Sex” (New York: Routledge, 1993), 16, cited in Susan Stryker, “My Words to Victor Frankenstein Above the Village of Chamounix: Performing Transgender Rage,” GLQ: A Journal of Lesbian & Gay Studies 1 (1994): 249.

is an interdisciplinary artist based in Brooklyn. They earned a BFA in Textiles from the Rhode Island School of Design. Schlacter was a Fellow in the 2017–2018 Queer|Art|Mentorship Program. Their work has been exhibited at Spring/Break Art Show in New York, Elephant Gallery in Nashville, and Transformer in Washington, D.C.