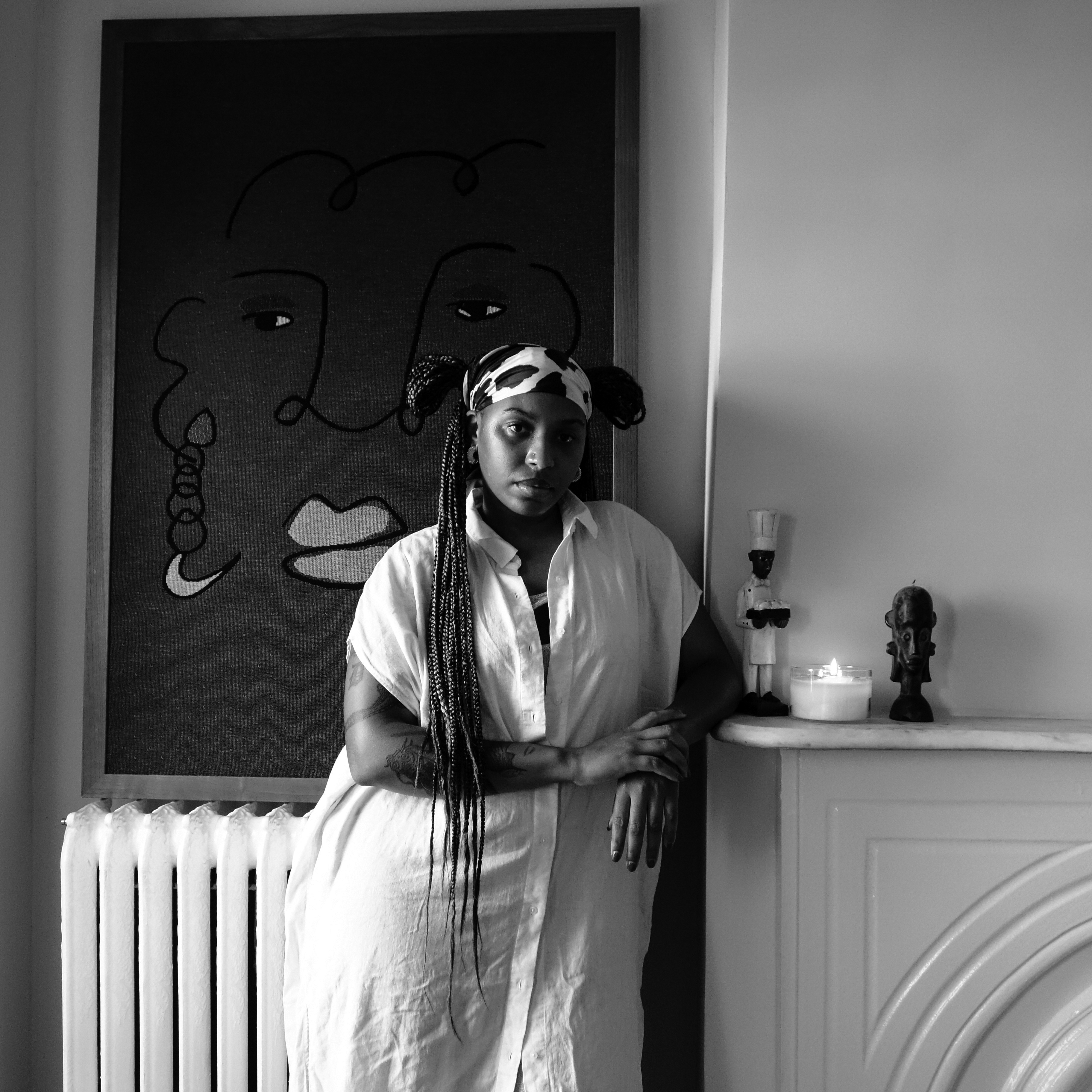 It was shepherd’s pie at Potterworld one day; chili dogs at Mel’s Diner the next. It was a conveyor belt of tourists, sticky and hungry, impatient and waiting for their oversized portions. It was caricature in food form. She was part of Food Rescue, a laughable misnomer: a cost-cutting program for the overwhelmed theme park restaurants of Universal Studios in Orlando—not some nonprofit for food insecurity, some charity for the hungry. Food Rescue regurgitated teenage temps, shuffled them from uniform to uniform. And for Tallahassee native Kia Damon, it was a thrill. The hustle, she tells me, “set the tone” for her career.

Her earliest memories in the kitchen are with her maternal grandmother: fried fish and grits on the stovetop, grandkids pining for their next bite. Her grandma’s sausage and mustard sandwich was a regular hit. “She was real country,” Damon smirks, “and I was her favorite.” She was from St. Augustine and passed on her love of Gullah-Geechee culture; it’s the kind of food Damon still finds most comforting. Her dad’s side brought Louisiana Creole cuisine into the fold. Together, it was “the best of both worlds when it comes to Black Southern cooking and living.”

Working in professional kitchens through Food Rescue taught Damon the fundamentals of cooking. But she wanted more out of the kitchen; she wanted to use food to express herself. And yet: “I was a regular degular country girl living in a dusty town in North Florida, minding my business, working my day-slash-night job.” So she used the tools to which she had access: Instagram, a friend who could design a logo, and a local print shop that would give her a good rate. The name she chose for herself, “Kia Cooks,” was straight to the point and easy to remember. Her logo, designed by friend Whitney Borkowski, set her apart. “It’s fire. If you put it on a bomber jacket, I’d wear it.” These initial responses told her she was onto something.

Part of her allure is her preternatural likability. She speaks to you like you’re an old friend. Treats her followers like they’re her people. On the night of the 2021 Capitol breach, she hopped on Instagram Live as “Kia Cooks” to comfort those online: “I’m thinking about how clown circus the government is… I figured I could get on here and talk with people who just want to smooth brain, no thoughts, banter, kiki while I make hamburger helper.” With Luther Vandross playing in the background, Damon showed us, step-by-step, how to make the “super, freakin’ American” dish.

Her talent, coupled with her warmth and media savvy, almost immediately earned her a reputation as an up-and-coming force within the culinary world. We discuss the concept of the “celebrity chef”—the Ina Gartens, Alison Romans, Gordon Ramsays, Bobby Flays of the industry—and I ask her how she envisions her career taking shape. Without hesitation: “I want it all.”

Only a few years after launching “Kia Cooks,” she became Executive Chef of the restaurant Lalito, a Cali-Mexican hotspot in Manhattan’s Chinatown. Responsible for setting the menu, Damon tried to reconcile disparate pulls: the restaurant’s signature Cali-Mexican flavors and her own inclination toward Afro-Caribbean and Black Southern cuisine. Lalito’s identity was shaky; it couldn’t quite decide who it wanted to be. It had taken over a once-thriving karaoke bar and had kept its booths. Conscious of Lalito's gentrifying presence in the neighborhood, Damon made a point of buying from local vendors and learning Chinatown's history. “I don’t feel like I did it successfully,” she admits, reflecting on the restaurant’s hodgepodge and her inability to create a sense of cohesion. But she was only 24. She had just moved to New York. And she was just discovering her voice as a chef.

What responsibility, I ask her, do chefs have when they cook food from cultures other than their own? She doesn’t have a clear answer. Her immediate response falls in line with the progressive dogma vis-à-vis cultural appropriation: “If I set out to do Ethiopian food, and people start saying I’m ‘elevating Ethiopian cooking,’ I start winning James Beard awards for my Ethiopian cooking… That wouldn’t sit right with me.” But she wavers. She doesn’t want “to feel boxed in.” She considers how the dynamic might shift if she were to, say, train in Japan for ten years and work at Niki Nakayama’s Michelin star restaurant in Los Angeles. Part of her hypothesizing comes from a desire to prove herself: “You see a Black woman and assume all I can do is this.”

It’s no secret that machismos run the culinary world. That big-name chefs like Damon—a Black, queer woman—are few and far between. While Damon assumes people are aware of the toxicity, of the racism, within the Southern restaurant scene, she wants me to know how insidious the culture is in New York. She tells me about the time she was “completely dismissed” when she walked into a restaurant looking for a job: “They suggested I apply to a waitress or a cashier position.” About the time she was outed by a restaurant owner’s son to the whole kitchen staff. They decided to use her face to promote the restaurant but offered her no compensation in return.

The discrimination and mistreatment adds to Damon’s frustration with the longtime practice of labeling restaurant staffs as “family.” It’s a dangerous narrative, she warns. “It provides a false sense of security and allows people to be manipulated.” We’re speaking as COVID-19 ravages the restaurant industry, as the unemployment rate skyrockets—hitting restaurant workers especially hard. She retorts, “Does a family cut your hours? Lay you off?” As a starting point, she asks for a simple name change: to ditch the term “Family Meal” for the after-hours, free-of-charge meals for all restaurant staff. Instead, call them what they are: “Staff Meal.” To Damon, the terminology masks the capitalist nature of the relationships. After all, “It’s a job. There’s money on the line.”

Damon’s meteoric rise to fame has afforded her the opportunity to reflect on these practices and consider how she wants to change the industry. Though her commitment may now be deeper, her communities have always pushed her “to think outside of Eurocentric and capitalist methods of operation.” To that end, her newest venture, Kia Feeds The People Program, will provide boxes of produce and pantry items to food insecure members of her Brooklyn community, with an emphasis on helping Black, queer, and trans folks. The boxes will also contain recipe cards; she wants recipients to feel some of the joy she experiences in the kitchen. The project has rich roots: its inspiration was the Black Panther Party’s Free Breakfast Program. Its goals: “to nourish my community, empower my community, promote self-sustainability among my community—so that we don’t have to rely on racist and stigmatized benefit programs.”

Where will she go from here? The past year has brought Damon a win on Food Network’s Chopped. A gig hosting the Nike video series Athlete’s Cookbook. An induction into the Forbes “30 Under 30” club. She matches her success with an unflinching self-confidence: “I feel limitless.” But in her personal life, it’s different; she has her limits. Her friends, for example, should not be counting on her favorite meal—duck mac and cheese—for their post-pandemic potluck. “Unless you got an invoice from me, y’all got cups and plates and potato chips.”

is the founding editor of PIQUE. She earned a BA in Art History from Barnard College in 2018. As a cataloguer at Sotheby’s, Crain prepared the catalogues for the Contemporary Art Evening Sale and the Contemporary Curated Sale in New York.

is a chef based in Brooklyn. A champion of Food Network’s Chopped, and the Season 2 host of Athlete’s Cookbook at Nike, Damon was selected as a 2021 Forbes “30 Under 30” Featured Honoree. She is the Culinary Director of Cherry Bombe and the founder of Kia Feeds The People Program. The New York Times named Damon one of the “16 Black Chefs Changing Food in America.”