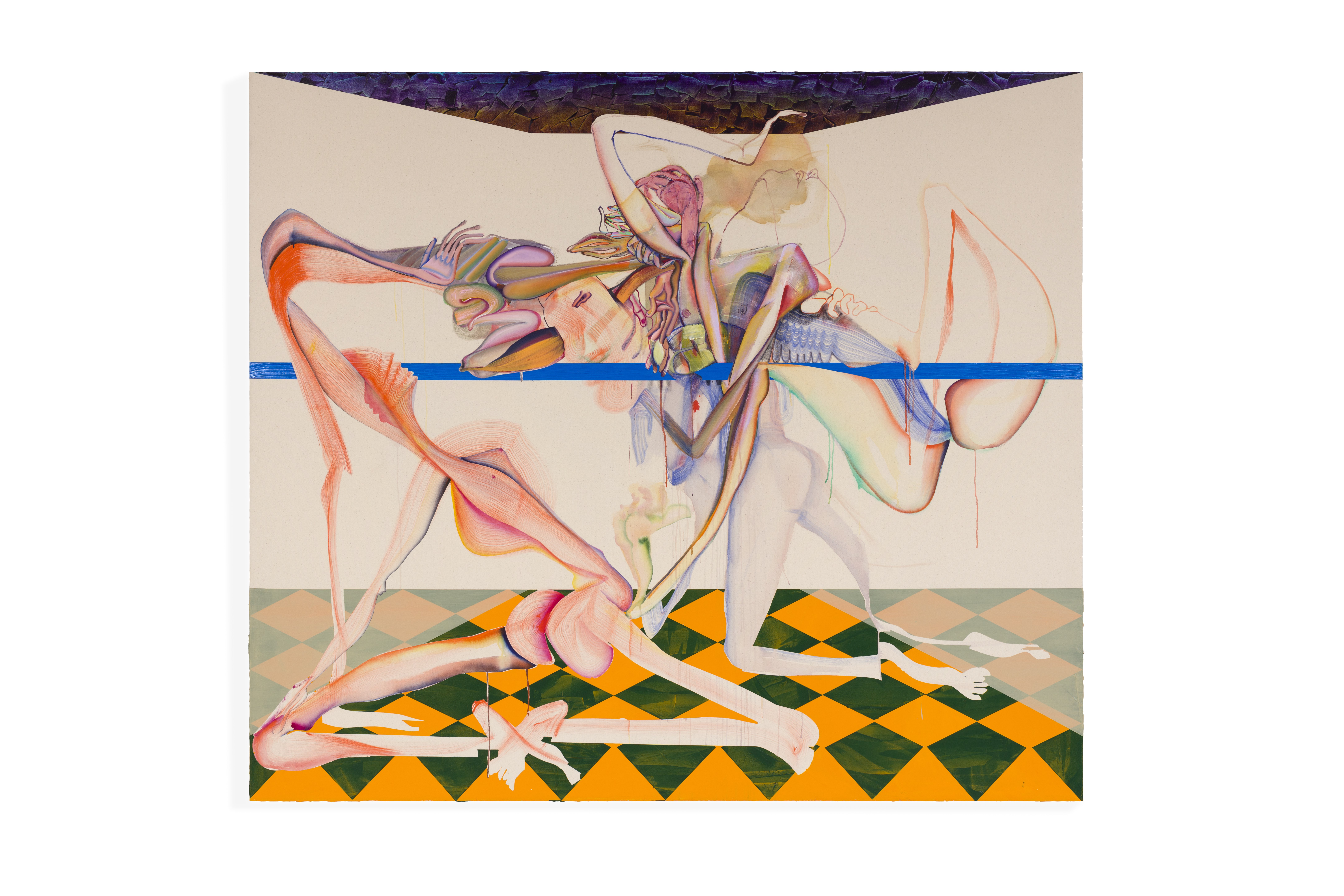 A cure for preteen boredom, as banal as anyone’s: paging Seventeen magazine at the grocery store. She was waiting for her mom by the cash register, biding her time. She had nowhere else to be. But then she spotted it: an advertisement for a tuition-free, conservatory-style high school in Los Angeles, where the kids “seemed queer and cool” and their stories even cooler. For twelve-year-old Christina Quarles, it changed everything.

As a child of Los Angeles, she was used to stumbling on barely-hidden treasure. Like the “for adults only” Mike Kelley exhibition at the blocks-from-her-home Los Angeles County Museum of Art. The “cheap after school program” that her mom, a single parent, enrolled her in for some much needed childcare: a youth art class at Frank Lloyd Wright’s Hollyhock House. The David Hockney landscapes she saw on school field trips that made something beautiful of her long, traffic-filled car rides.

But the decision to attend Los Angeles County High School for the Arts was her choice. Its community, her reward. Quarles contrasts it with her experience of graduate school, with “the period when you’re emerging as an artist”: a time marked by a sense of scarcity, by young artists clawing for “the one spot” on a gallery’s roster. Unlike her graduate school peers, Quarles’s classmates at LACHSA nurtured each other’s talents. Showed up for each other’s shows. Didn’t care whether you had money or wore nice clothes. “It exposed me,” she says, “to a value set that I still hold really dear.” She can’t help but gush; the school, after all, introduced her to her wife, her assistant, and her first Los Angeles studio mate.

The contemporary art world, however, isn’t known for such kumbaya. So how does she handle its elitism? Its insatiable hunger for the next best thing? With representation at two major galleries, paintings at museums like the Whitney and the Tate Modern, and a major museum solo exhibition to her name, Quarles can’t pretend she is outside of the establishment. She knows she’s an insider and was reminded of her status at her MFA graduation; curator Robert Storr quipped that she was “graduating from Yale and could never be an ‘outsider artist’ again.” And yet: she is a queer woman of color in an industry with all of the typical biases and structural inequalities. So Quarles resists binary categorization. Sees herself as teetering on the edge. Insists she prefers watching “cake decorating videos and nail art technique” to studying old master paintings.

The dynamic of feeling both insider and outsider—and neither one nor the other—mirrors her relationship to race. As the only child of a white mother and Black father, Quarles “struggled with the idea of being ‘mixed race.’” The term implies a cohesion and a singularity of experience that just didn’t fit. To her, “racially multiple” is more apt: it’s a both and descriptor. A neither nor relationship. One which allows room for uneasiness. For complexity.

Because of her light skin, Quarles passes as white. Kids on the playground used to tell her she was lying when she told them her dad was Black. She bore “silent witness to whiteness when people thought there were only white people in the room.” Ultimately, the differences between how people saw her and what she knew to be true opened up a world of possibilities: “If my racial identity isn’t quite working, maybe all aspects of my identity are subject to being questioned.”

The figures in her paintings likewise unravel upon observation. Unclothed and intertwined, they form sinuous mounds and angular trenches. They fuse together yet drift apart. Their bodies, on the whole, create an indecipherable web of limbs and joints. In Sumday (We Gunna Rest on) Sunday, Quarles presents what appears to be two figures; on closer looking, however, we discover extra hands. Extra sets of arms. Impossible-to-conceive contortions. It’s piquant: one figure reclines, arms overhead, as the other leans forward—fingertips pressed into their partner’s flesh. Similar exchanges appear throughout Quarles’s oeuvre; her figures appear as if exploring the depths of their desires. Curator Helen Molesworth describes the result: “You get seduced by [the paintings], thinking, ‘These are pretty sexy.’”1 But a discomfort arises as you spend more time looking. Bulbous limbs attach onto wiry ones. Warm orange tones blend into sickly greys. The drips of Quarles’s paint feel pestilent. A malaise qualifies their sexiness.

Quarles creates the paintings through a multi-step process—each aspect of which adds layers to their complexity. She loosely paints the figures; photographs the composition; plays with computer programs to design the landscape-like forms; prints large-scale stencils for the intricate patterns; and carefully paints in the lines. Curator Mark Godfrey describes the process as “a disjunctive contrast between the fluid and the constructed.”2 It embodies her analysis of identity: it marries opposite characteristics, reifying a whole from disparate parts. The final paintings reflect the multiplicity of methodologies at play. In Sumday (We Gunna Rest on) Sunday, for example, Quarles’s juxtaposes the organicism of the figures with the measured impasto of her cartoonish landmasses. She reveals her hand through areas of quick brushwork yet conceals it in the flawless gradient of the sky.

Representing the body feels like second-nature for Quarles. Attending figure drawing courses has been a staple of her practice since she snuck into her first class at age twelve. Anxious to keep it up during the COVID-19 pandemic, she rallied a group of queer artists and invited them to her backyard. They posed for each other, naked but for masks. Over years of refining her technique, she’s developed a sort of muscle memory; as a result, she can approach her full-sized canvases without “thinking about how a body would be situated in space.” She can instead focus on the sociopolitical questions at stake when representing bodies in visual art.

She strives to represent what it feels like to live in her body. She wants to visualize her conflicting traits and selves—all of which are subject to change based on whom she is interacting with—since others see her “at a very stable, fixed point.” She’s seen her body change over time. She’s known her personality as it shifts. And she wants to narrow the gap between “how we see ourselves and how we see everybody else.” This experience of herself is universal: we all shapeshift, and we all, as the Whitman adage goes, “contain multitudes.” But because Quarles is a person of color, because she is a woman, and because she is queer, she is subject to a form of reductivism that precludes an untinged reading of her work. Art historian Darby English writes on the phenomenon as it relates to Black artists: “a problem has long inhibited understandings of what we call ‘black art’ in the United States: a tendency to limit the significance of works assignable to black artists to what can be illuminated by reference to a work’s purported racial character.”3 Quarles attempts to mitigate this tendency by introducing ambiguity into her works.

She resists essentialism by eliminating stereotypical visual cues. The figures in her painting Carefully Taut lack traditional gender markers: they have no discernable hairstyles, no visible genitals, no clear breasts. Their skin tones—which range from high-keyed orange to ghoulish blue—bear no resemblance to natural pigments. She’s interested in how “signifiers of gender get confused” when you consider factors like age or body size; as she paints, she thinks about a model with “a really bony rib cage” or someone “who’s elderly so their skin is sagging.” She thinks about “someone who is male presenting and maybe weighs 300 lbs, so they have an A-cup.” With the hodgepodge of elements, she arrives at “a fleshiness, a boniness, a muscle tissue-iness” that transcends specific identities.

What role, then, do identity-specific exhibitions and institutions play in the framing of Quarles’s work? Her paintings, for example, have been included in seminal identity-specific group shows, like the New Museum's 2017 exhibition Trigger: Gender as a Tool and a Weapon, which featured queer and trans artists who explore gender as a theme of their work. She jokes that there’s a convenience to identity-specific exhibitions: somebody else can do the job of “coming out” for her. And she acknowledges the visibility that such contexts provide. But she worries that they create a distance between the art and the viewers who don’t share the artists’ identities. She fears that viewers miss the “universal philosophies'' in question and fall into the reductionist traps of which Darby English warns.

Nevertheless, it was exhibitions like Fictions at The Studio Museum in Harlem that drew attention to her work in the year following her graduation from Yale. And reporting by the New York Times that brought her mainstream publicity, even if the most recent coverage positioned her alongside an artist whose work lacks any aesthetic or theoretical similarity to hers—but who also happens to be a queer, artist of color.4

There’s only so much she can control when a painting leaves her studio. Once purchased, it can live in a millionaire’s living room or on the walls of a museum in Oslo. It can be resold at auction for many multiples more than she originally received. And the fickle tastes of the art world are not lost on her: “I could be out of fashion tomorrow.” So yes, fancy people buy her work; fancy museums collect her work; fancy institutions exhibit her work. But no, she’s not a comfortable insider.

is the founding editor of PIQUE. She earned a BA in Art History from Barnard College in 2018. As a cataloguer at Sotheby’s, Crain prepared the catalogues for the Contemporary Art Evening Sale and the Contemporary Curated Sale in New York.

is an artist based in Los Angeles. She earned her BA in Art and Philosophy from Hampshire College and her MFA in Painting from Yale School of Art. Represented by Regen Projects in L.A. and Pilar Corrias in London, Quarles’s work has been exhibited at the Pérez Art Museum, the Walker Art Center, the Hammer Museum, and the Museum of Contemporary Art, Los Angeles, among others. Her solo exhibition Christina Quarles opened at the Museum of Contemporary Art Chicago on March 13, 2021.