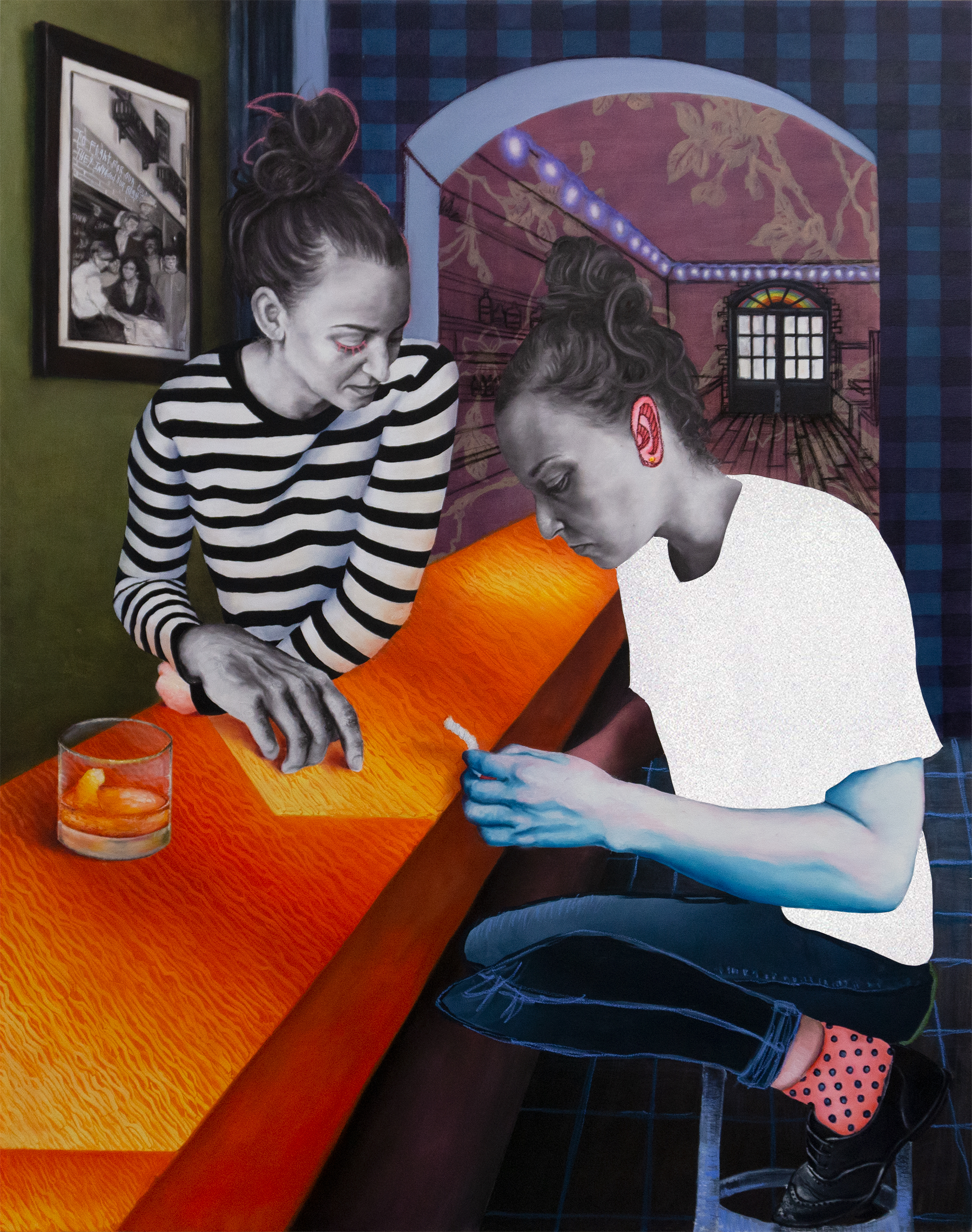 Chloe Chiasson, A Complex Negotiation, 2019
ESSAY
“DYKING IT UP” AS BEST I CAN
Lucy Dickson

“Can’t you just…you know…dyke it up a bit?,” she said, peering over the frame of her horn-rimmed glasses. We were a match made in hell: an out and proud plus-sized queer performer versus a haughty director—a petite, delicately freckled English Rose with a penchant for faux-feminism, almond milk lattes and culturally insensitive yoga retreats. My bottom lip began to quiver, and my eyes stung with salty tears as the floor beneath me became unsteady. This was my first proper audition, my first opportunity at a major commercial break, and I was almost certain I’d fallen at the first hurdle. I was nowhere near pretty enough to play a romantic lead, not quite straight enough to play the fat best friend, but also, apparently, not butch enough to play the lesbian comic relief.

The show in question was Legally Blonde: it was my final year at performing arts school, and this was our agency showcase. I was, eventually, cast as the comically butch lesbian; likely an after-the-fact attempt at “authentic” queer representation. They dressed me in dungarees and Doc Martens, tossed me a copy of The Female Eunuch, and instructed me to leer at anything with breasts.

I felt stirred by an odd concoction of pride and despair. I was finally allowed to celebrate my queer identity in front of an audience, but in doing so, I would also be forced to compromise it. My sexuality would become something to be laughed at, vilified, and derided. But, as least, it would be seen. So I “dyked it up,” ambled home, and cried.

Though it crippled my confidence, the very opportunity to perform bespeaks my privilege; after all, I am a cisgender, white, middle-class, Cambridge educated lesbian. It is much harder for queer disabled women, QTIPOC, bisexual women, non-binary people, and trans folks to even catch a break in the commercial theater world. From the outset, we’re considered not quite “enough” or far “too much.” Too Loud. Too Messy. Too Political. Too Proud.

The irony is that Musical Theater attracts and fosters queer community. Performance is a skill that, as queers, we learn from childhood: we do an incredible job of pretending to be something that we’re not. We appease the intolerant world around us by playing the part of the straight-forward, straight A, straight kid. Yet we shelter our own in the safe haven of the rehearsal room, a space most conducive to creating a chosen family. In its confines, we bear our most authentic, vulnerable selves—parts of ourselves we often must hide from our genetic parents and siblings.

Nonetheless, the world of commercial theater has historically been filled with stories of straight, cisgender white men, rescuing straight, cisgender white women. Where commercial audiences are occasionally offered a queer narrative, it often exists only to allow our straight, white protagonists to navigate their own, far more centralized, stories. This is the case for most “queer” shows that have received mainstream Broadway success. Kinky Boots, for example, is a show about drag queens, yet it only features heterosexual relationships. Rent, meanwhile, is told through the lens of a cis, white, heterosexual man.

Theaters may well be populated by queers, but they are still, by and large, owned and run, by conservative, straight, white men who remain unwilling to take the financial risk that comes with programming “difficult” or “challenging” queer work. As Broadway and West End Tickets become more prohibitively expensive, theaters, by default, grow more elitist and more cautious to keep in touch with the only people who can afford their tickets.

Where queer practitioners and producers are given a platform, they are forced to assimilate. Perhaps this is why the openly queer Jordan Roth, despite being a majority stakeholder in five of Broadway’s largest theaters, has, to date, only programmed two shows featuring queer protagonists (both of whom were cisgender men).

While we are beginning to see an array of sensitively portrayed gay characters onstage, trans characters remain almost non-existent. Those that exist are either sexually aggressive and predatory (Frank ‘N’ Furter in The Rocky Horror Picture Show, Hedwig in Hedwig and The Angry Inch), or defined by tragedy (Angel in Rent—the only character to die on stage as a result of their AIDS). What’s more, it is rare that we find such a role performed by a trans actor; they are often passed over for their more commercially viable, cisgender counterparts.

Where can we go from here?

The truth is: not all queer narratives are “commercial.” Many are Loud. Are Messy. Are Political. And they force cis and straight audiences to sit with the discomfort of their privilege.

A first step is finding characters and moments in existing works which, when queered, become all the more meaningful. When the Pasadena Playhouse production of Little Shop of Horrors cast trans actor MJ Rodriguez as Audrey, for example, the show added a new layer of cultural relevance: Audrey’s entrapment in an abusive relationship drew attention to the disproportionate rate of violence against Black trans women. Lines in “Suddenly Seymour” gained a new poignancy: a lover telling a trans woman that she doesn’t ‘need no makeup’ or ‘have to pretend,’ and that he sees the ‘girl that’s inside [her]’ created a new emotional depth to the score. Rather than compromise the integrity of the work, the queering of the cast added nuance to the existing narrative.

Imposing queerness upon a heterosexual relationship dynamic will not, however, always lead to authentic queer representation. We deserve more work about queer women, QTIPOC, trans folks, and disabled queers, and we deserve to tell our stories ourselves.

Such work exists. We must challenge the gatekeepers to let it be seen. We must take up space in theaters currently, and historically, held by those of great privilege. And when we ultimately find ourselves in positions of power, we must focus on the stories still not being told.

So maybe that bespectacled director was right. Maybe I did need to “dyke it up.” Not with flannel shirts and the dog-eared epistles of Germaine Greer. But perhaps I needed to assert myself as the louder, prouder, messier, and more political dyke I am.

is a writer, actor, and producer based in London. She earned a BA in English Language and Literature from the University of Cambridge in 2017. She is a co-founder of Queerly Productions (@QueerlyProd), a London-based theater company dedicated to spotlighting queer female, non-binary, and trans voices in Musical Theater.

is an artist based in New York. She earned a BS in Health Promotion and Psychology from the University of Texas at Austin and a MFA in Painting from the New York Academy of Art. A recipient of the Chubb Post-Graduate Fellowship, Chiasson was an Artist in Residence at the Belles Artes Residency and is a 2021 finalist for The Bennett Prize.