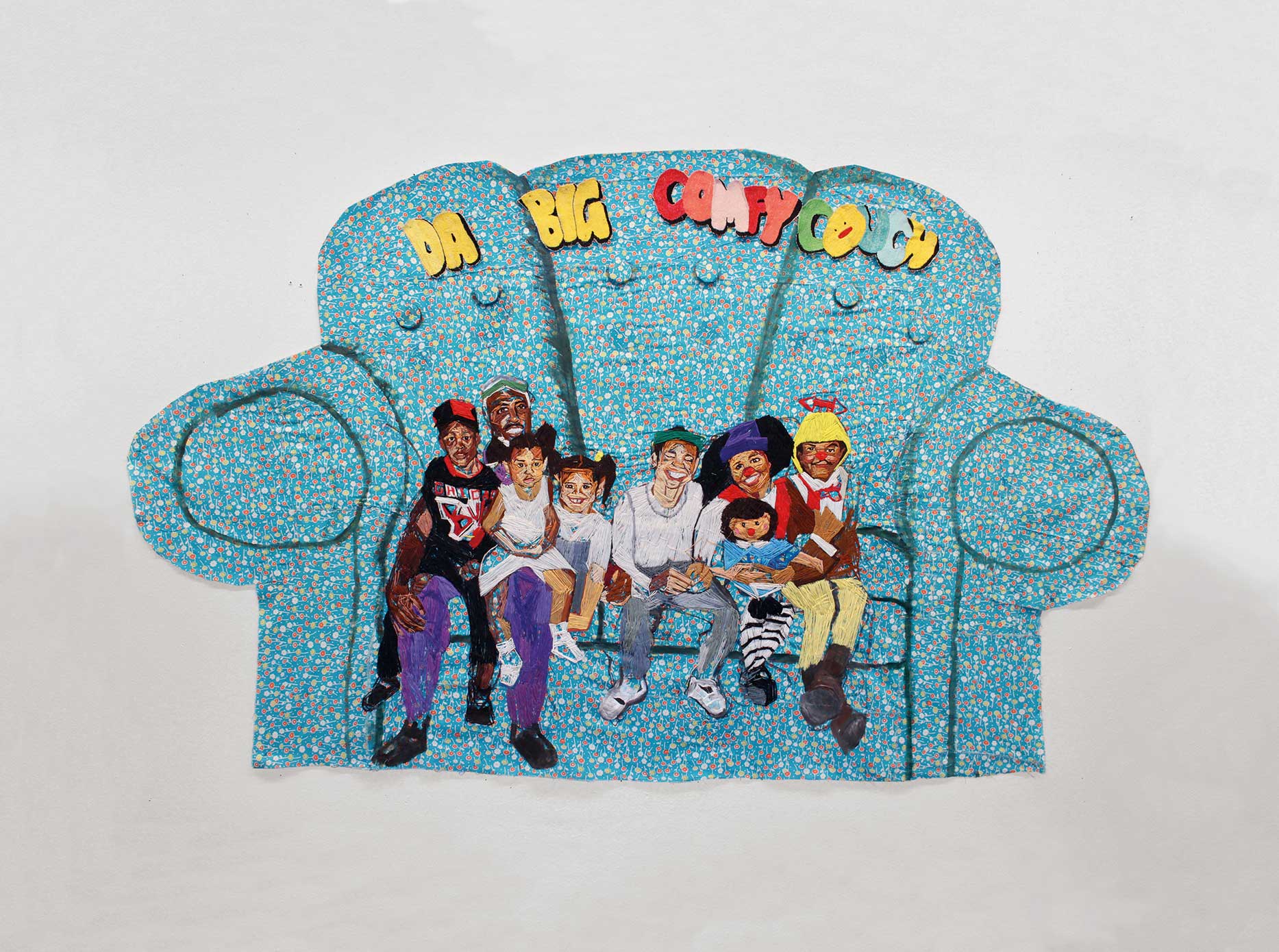 When you look at their work Da Big Comfy Couch, you see a deceptively simple snapshot of a big happy family. Their smiling faces look out at us. They snuggle together, children on their father’s lap, everyone piled up on “Da Big Comfy Couch.” The couch hangs flat against the wall, and the figures’ feet cast no shadows; they float in a space that is imprecise and hard to locate. Thomas embroiders their family into the hokey ‘90s preschool show The Big Comfy Couch, enmeshing the real with the fictive, collapsing space and time to rekindle memories of their own making. Nostalgic for their childhood—when pressures to conform to gendered expectations did not yet hit—they weave old family photographs together, molding a utopian vision of their past.

The artist’s process allows for ample editing; Thomas can always reverse the strokes of their thread. Embroidery likewise allows them to re-cast, re-write, and revise the way that Black people have historically been depicted. For Thomas, that means welcoming us into their childhood home, inviting us to feel its joy and love. Warmth radiates off their father as he sleeps with his baby nestled to his chest; Thomas swaddles the pair in thick swaths of cocoon-like thread. Bashful and giggling, a toddler crouches to conceal themself while on the potty; Thomas bathes the child in a halo-like glow.

Thomas’s textiles exist within a lineage of radical art-making: Feminists of the 1970s weaponized handicrafts, reappropriating their traditional domestic associations. Queer artists and gay rights activists of the 1970s and 1980s harnessed the performative quality of textiles, reimagining modes of self-expression and sexual fantasy. Textiles offer material and metaphorical benefit to political activists; art historian Julia Bryan-Wilson argues that textiles “have been marshaled for their specially tensile properties, that is, their capacity to be pulled, stressed, and withstand tension, sometimes to their breaking point.”1 Chiffon Thomas plays with the pliancy of their textiles. They are taut, and they are slackened. They are frayed, and they are closely shorn. They are neither one thing nor the other.

With a surgeon’s command, Thomas pierces their needle through their textiles, manipulating and altering their form. Upon first glance, the disfigured, fleshy head in their sculpture Inhabited calls to mind the war-torn bodies in Otto Dix’s painting The Skat Players; however, for Thomas, who is non-binary, anatomical manipulation provides a sense of awe and hope. They explain the stitches we see as part of a process of becoming: a transition from dysmorphia to metamorphosis.

Under the crushing weight of a white plaster column, the face emerges, scathed but intact. Thomas slices into the column—a longtime symbol of Western culture and colonialism—dismantling its foundation and unearthing all it seeks to confine.

Raised in Chicago as a Jehovah’s Witness, religion figured prominently in the artist’s upbringing. While their gender identity and sexual orientation preclude an easy relationship with the doctrine of faith they were taught to follow, they nevertheless crave spiritual communion with others. We see them wrestle with these conflicts in their mask-like forms, which they construct with patched-together used bibles. By crafting human form from biblical pages, Thomas carves space for themself in a religion that has otherwise shut them out. At the same time, the masks bear witness to the artist’s spiritual affliction; we can see loose threads twisting and dangling from their forms, knotting and tangling without resolve.

Chiffon Thomas yearns for a world that does not yet exist. They look to their past for glimpses of the freedom they desire. They weave binary qualities together, crafting fluid subjects who evade simple categories—modeling the self-determination they seek. Queer theorist José Esteban Muñoz posits that “to live inside straight time and ask for, desire, and imagine another time and place is to represent and perform a desire that is both utopian and queer.”2 Thomas wields their needle to craft a utopia of their own design.

is the founding editor of PIQUE. She earned a BA in Art History from Barnard College in 2018. As a cataloguer at Sotheby’s, Crain prepared auction catalogues for the Contemporary Art Evening Sale and the Contemporary Curated Sale in New York.

is a multidisciplinary artist based in New Haven. They earned an MFA in Painting from the Yale University School of Art in 2020. Represented by Kohn Gallery in Los Angeles, their work is held in the Pérez Art Museum in Miami and will be featured in a solo exhibition at Jenkins Johnson Gallery in New York in 2021.