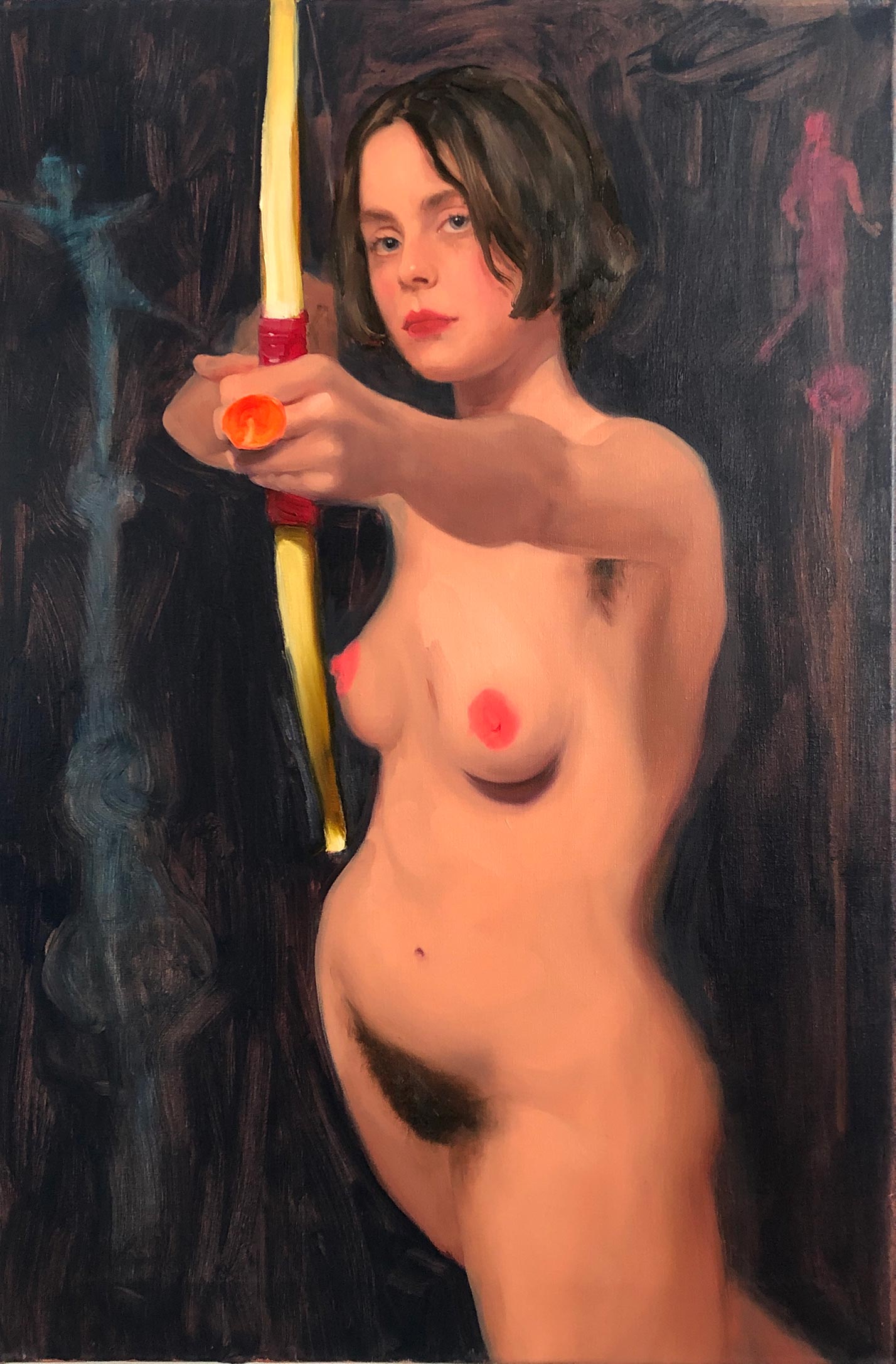 Her fingers grip her opponent’s flesh. She clenches her teeth, and her cheeks flush. As she writhes and wrestles in a purple haze of lush brush stroke, we consume her carnal abandon.

Jenna Gribbon’s Pollyanna Wrestlers transports us to the musty yet opulent Victorian bedchamber that captivated the artist as a child. Gribbon tells me she watched Pollyanna on VHS everyday after school. She likens her infatuation with the titular character to teenage heartthrob, as if Gribbon would have—in an alternate universe—decorated her Knoxville bedroom walls with Pollyanna posters. It is through the unclothed women wrestlers she paints that the artist stakes claim of her childhood fantasy, queering the smug virtue of the 1960s Disney film.

Gribbon’s friends often ask her to paint them, so she arranges “wrestling sessions” in her Clinton Hill apartment, which are “more like choreographing a dance than actual fighting.” Her choreographic process: “very collaborative.” Relinquishing complete creative control, she allows her models to self-direct their poses.

The model who most frequently appears in Gribbon’s work is her girlfriend Mackenzie Scott, the musician known as Torres. In many regards, their relationship resembles the typical dynamic with which we are familiar: Jenna spends hours in her studio studying Mackenzie’s body—the particularities of her thin hands, the expressiveness of her pursed lips, the careful glance of her cool blue eyes. Mackenzie reciprocates Jenna’s intensive gaze as she poses; the intimacy of their observation naturally lends itself to a romantic relationship. An equal participant, Mackenzie is not the typical muse.

As she describes their relationship, Céline Sciamma’s 2019 film Portrait of a Lady on Fire comes to mind. Watching it, she tells me, was uncanny: “this is specifically my kink.” The film undermines the long held hierarchy that assumes a muse to be the passive object of an artist’s desire; likewise, the mutual exchange between Torres and Jenna Gribbon is the collaboration which propels their relationship and creative work forward. Gribbon quips that it is “convenient” to cohabitate with someone who provides so much inspiration, yet it is the product of their partnership that directly translates to their respective career success. Jenna, for example, painted the cover of Torres’s most recent album, Silver Tongue; the painting, a portrait of Mackenzie, was selected for the inaugural group exhibition at Mamoth Gallery in London.

While Sciamma uncovers untold histories of women artists, Gribbon mines the canon of art history to refashion its tropes for her own end. She first chose to depict wrestling figures because of the homoeroticism she perceived in the many art historical depictions of wrestlers—nearly all of which take men as their subject. Wrestling figures also satisfy another mandatory condition of her work: “I don’t like to paint women in passive positions.”

Gribbon lodges herself into the Western canon by adopting the visual language of legends from past eras. Her handling of paint calls to mind the confident Impressionist brushstrokes of Pierre Renoir, while her dream-like interiors—with their perspectival distortion and deliberate imperceptibility—resemble Berthe Morisot’s depictions of nineteenth-­century French spaces.

Gribbon knows she is not what comes to mind when most people think of who an artist is. She is a queer woman with a nine-year-old son—the near opposite of the shirtless, cigarette-smoking machismos of Abstract Expressionism. Conscious of how identity has long dictated who gets canonical consideration, Gribbon depicts her artistic circle at work. She captures her peers taking reference photos for paintings. She shows them breastfeeding. Using the scaffolding of art historical convention, Jenna Gribbon puts her life on display—her sexuality, her gender, and her motherhood—in order “to make the case that it’s a legitimate way to be an artist.”

is the founding editor of PIQUE. She earned a BA in Art History from Barnard College in 2018. As a cataloguer at Sotheby’s, Crain prepared auction catalogues for the Contemporary Art Evening Sale and the Contemporary Curated Sale in New York.

is a painter based in Brooklyn. Represented by Fredericks & Freiser, Gribbon’s work has been exhibited at Galerie Perrotin and The Warsaw Museum of Modern Art. Her work has been reviewed in Artforum and in Art In America.